The locomotive is portrayed in crimson lake (London Midland and Scottish) livery.
No 6201 at Crewe Works in Cheshire UK, as it was first built in 1933 with a Fowler tender and round buffer heads. These were soon modified to oval shape to match the LMS distinctive look The locomotive underwent modifications in the 1930s, including a longer firebox and a 10 ton coal capacity Stanier tender It is one of 13 locomotives and was used for Express passenger duties across the LMS region prior to Nationalisation in 1948.
Designed by Sir William Stanier, this locomotive was part of the Thames Diamond Jubilee Pageant on 3 June 2012, which began at Battersea Railway Bridge. Its distinctive whistle sound signalled the start of the event on Chelsea Railway Bridge, London.

Reflections of a Princess by Kevin Parrish 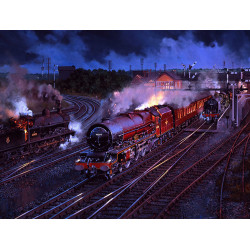