Preserved Caledonian single No.123 on one of it's last steam special runs during the early 1960's, from Glasgow to Oban is seen passing Loch Awe.
This unique 4-2-2 was built by Neilson and Company in 1886 as works No.3553. In 1914 it was placed on the Caledonian Railway duplicate list and renumbered 1123. In LMS days it became No.14010 and was given the power classification 1P. During the 1920s it was allocated to working the directors' saloon, but it was returned to ordinary service in 1930.
The locomotive was withdrawn in 1935, by which time it was the last single-pair driving wheel express locomotive working in Britain. 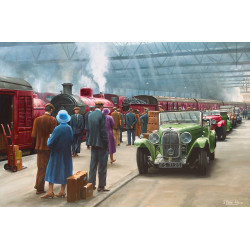 The cab road alongside platform 2 of Edinburgh Princes Street station circa 1935. Passengers arrivin..