Birmingham New Street Station in the early 1960s by Kevin Parrish (Artist and Illustrator) based on a photograph by Leonard Stace.
Original oil painting size 26in x 16in (65cm x 40cm) on board.

This is my memory of New Street Station as it was in the early 1960s, prior to its demolition in 1965.
Born in 1953, I remember as a child standing on Platform 10 (depicted here), waiting for the train to arrive. It was a draughty, cold wait and the train was late.
Life was at a slower pace in those days, with the railway staff having time for a chat on the platform, when there were train delays.
The image depicts the Jubilee Class Locomotive, patiently waiting on the inner track, ready to be assigned to a passenger train.

Waiting For The Train by Kevin Parrish 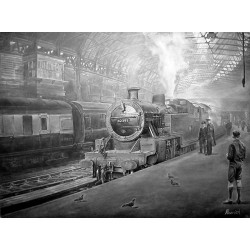