One of William Staniers' 'Princess Coronation' Pacifics No.6230 'Duchess of Buccleuch' tears along the West Coast main line approaching Rugeley, Staffordshire with a London Euston-Glasgow express not long after the engine was built at Crewe in June 1938. No.6230 was one of a batch of non-streamlined members of this class which were considered by many observers to be the ultimate in British steam power. In later years this engine, along with the rest of the class, was fitted with smoke deflectors. She was withdrawn from service by British Railways in November 1963. 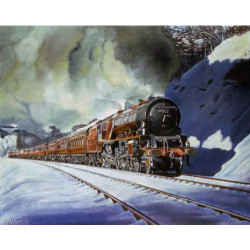